By: bobblys@outlook.com
In: Influence's, Life

There are moments that cry out to be fulfilled.

Or giving your money away, all of it.

Your heart is beating, isn’t it?

You’re not in chains, are you?

There is nothing more pathetic than caution

even, possibly, your own.

Over the last 15 years I have amassed a collection of writings, handwritten across a handful of notebooks, some just a simple few words, others long quotes, stories or poems.

Anything that has resonated over the years has been written and reflected upon, there is great comfort to be found within this collection and also great sorrow. As with any collection of anything over an extended period of time it is likely that there will be memories and emotions attached to different moments in time.

Regardless it made sense to share the latest two pieces that I jotted down in the collection. Mainly as they give an insight into this particular moment in time.

If I deem you worthy, I commit, I throw everything into it and while there is only a handful of people throughout my life I have dedicated an amount of loyalty too, it has been enough.

I like to think that those I care about know this, my one process now is to make sure that they do.

Had I been more confident many years ago I would have ensured to make it known at any given opportunity, and some things may be very different.

I will continue throwing around my affections to the select few and will continue to throw away my money when I think someone else needs it more, while some say I’m a fool and loyal to a fault, often to those who are undeserving, what does it matter?

To live in caution, to love with expectations of it being reciprocated, and to give, wanting to receive is boring, there is no reward because there is no risk. My circle is smaller than ever, but even those on the peripheral if I’ve mentally made that commitment, it will always be there, right, wrong, or indifferent.

For some reason at some time, it was worth it. Maybe it was never about them and maybe it was about what I needed for me.

In a few weeks me and Scott will be moving into our home. A home purchased without me having viewed it, a home applied for after saying “Yep, that will do” one day and committing.

Now it feels right and makes sense, there was no real thought, it was just an organic easy decision, that once we said yes, we figured it out.

We had thought about boats, caravans, locations up and down the country, where we went wrong was thinking too much, so I will continue to throw myself into stuff and see what happens. It doesn’t always work, but if it doesn’t there is always something else around the corner.

and anywhere. Of course you have

to open your eyes to a kind of

second level, but it’s not really

hard. The whole business of

what’s reality and what isn’t has

never been solved and probably

never will be. So I don’t care to

be too definite about anything.

I have a lot of edges called Perhaps

and almost nothing you can call

Certainty. For myself, but not

for other people. That’s a place

you just can’t get into, not

I’ll just leave you with this.

I don’t care how many angels can

dance on the head of a pin. It’s

enough to know that for some people

they exist, and that they dance.

I spend a lot of time drifting in and out of daydreams, thinking, focusing on things other than reality, the world is much bigger than what we perceive as real and tangible.

It is by drifting within these thoughts that I find my creativity and inspiration.

Knowing that the world is bigger than what lies before us withing the constraints of time and space allows me to have faith in something that isn’t tangible, what that is, I can’t articulate, but I don’t really need too, and neither do you.

I have spent time with people who have so deeply believed in a God that I cannot picture and choose to actively reject, yet their faith and the way they both express it and give themselves over to it has brought me to tears.

The reason is simple, the fact these people believe in something so deeply and use it to navigate their lives is enough. While I cannot hand myself over to the same thoughts I can see the beauty in their faith and for me that’s enough.

Anyway, ignoring this tangent if it’s not your jam, the next post will be a continuation of ‘Why We Ride Part 2”

For anyone interested in Mary Oliver’s work there is a 3 Book Collection over on Amazon that is well worth getting hold of. 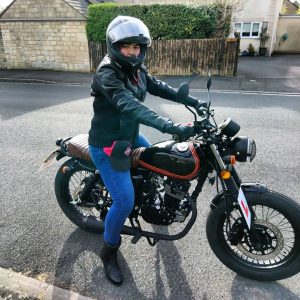